Q&A Do You Want a Heavy Bow or a Light One?

I got this question from one of my University of Chicago archers: “I have often heard a heated debate over whether one should shoot a heavy bow vs. a light one. Today, I was reminded of that debate today when I was using my somewhat heavy compound bow. Camp A says that people should always use lighter bows, because with lighter bows, it’s easier to be stable due to the lack of significant strain on the muscles used to hold up the bow. Camp B says that people should always use heavier bows, because with heavier bows, it stabilizes your shot since more weight equals more inertia. Are both sides correct, and is it just personal preference?” Vincent Chen 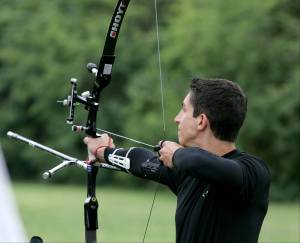 If you have to make positional changes in the bow at full draw, to get your sight’s aperture or arrow point on your point of aim, and you have little time, you want the bow to have less mass (= less inertia, meaning it is easier to move), so it can be moved while still having time to settle down from that movement. ( I use the metaphor of cartoon characters that run and then stop abruptly, vibrating to a stop, which isn’t quite correct, but it does take a little time after a gross movement for “stillness” to occur, plus you need to assure yourself that stillness has been achieved and you can only do that through observation over time.) If you have more time at full draw, you can afford the extra mass (which would slow such repositionings down). That extra mass really comes into play when the arrow is loosed in that the bow is barely being held when the string is loosed, so how much it moves is dependent upon inertia and the forces acting on the bow. Since the bow acts on the arrow and vice-versa, the only big other player is gravity.

This Italian barebow riser is massive and that’s before the weights that fit into the two round holes are installed!

Now, recurve barebow archers, they are different. Since they are forbidden to take small amounts of mass and spread them out in space via stabilizers, like Olympic Recurve archers, they are forced to maximize what they have, which is the bow’s mass. Recurve bows made specifically for barebow tend to be quite heavy indeed as there is no other stabilization allowed. This then requires some extra time at full draw when shooting, unavoidably so. For example, I bought the riser of a bow shot by a world championship bronze medalist barebow archer. He had the grip taken off and then made into a mold to cast a replacement . . . in brass. I didn’t measure the weight difference between a large plastic grip piece and one of the same shape in brass but it was more than a pound. It made the bow heavier yet didn’t stick out far enough to fall prey to the “no stabilizer” rules.

A secondary question is whether the archers have enough strength in their deltoid muscle (on their upper bow arm) to hold up that much weight. Most beginning archers do not, especially youths and beginners with little upper body development, so I recommend that these folks “keep it light.” Over time those muscles will get stronger and adding weight to must bows then is relatively easy.

Filed under For All Coaches, Q & A

One response to “Q&A Do You Want a Heavy Bow or a Light One?”