I was watching another video by one of my favorite golf instructors (Don Trajan) recently and he said something quite profound. He was addressing the relationship of foot position to the golf swing and brought up the example of Ben Hogan. If you are not aware of Mr. Hogan, he is a golf demi-god, in the Hall of Fame, etc. But in discussing Mr. Hogan’s golf swing with a biomechanics specialist it was felt that Mr. Hogan was also one of the most supple and flexible golfers ever to have played the game. The estimate was that there are only about a half dozen golfers in this country who have the same degree of flexibility as Mr. Hogan did. Now, Mr. Hogan’s instructional book (Five Lessons: The Fundamentals of the Modern Golf Swing) is an instruction classic with almost a million copies in print. This means that all of the golfers using his book are

following the advice of someone who has abilities they do not have.

Coach Trajan’s statement was “When you read things and want to do things, do you have the physical attributes to do them?” Brilliant. Obviously this applies to the developmental arc of all archer-athletes who are striving for elite status. They do not have all of the attributes needed to support elite archery technique, so they work on their cardio fitness, they build strength and flexibility, and they refine their form so that they will. But what about the rest of us?

The example I refer to so often is the open stance adopted by so many. Realize that whatever is happening with regard to where your feet are positioned, your upper body has to conform to certain requirements: you have to be a full draw without fighting to keep your bow “on target” for enough time to establish your aim and that you are not moving before you can finish your shot. Whatever you do with your feet, it cannot disrupt your upper body geometry. 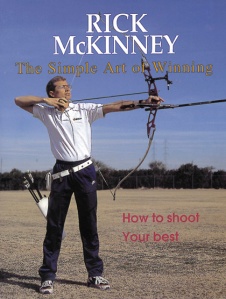 Modern American Olympic Recurve archery form was developed in the 1970’s and 1980’s by Rick McKinney and Darryl Pace. They won everything in sight and by so doing attracted the most people emulating them. Part of their shots was a quite open stance. McKinney mentioned in his classic book, The Simple Art of Winning, that he felt the open stance helped him to “get into his back” muscles better. Later, people reading his book (including me) took that as “an open stance facilitates use of the appropriate back muscles.” This turns out to exactly demonstrate the statement of Coach Trajan above.

It is my belief that this is an exactly 180 degrees incorrect interpretation. The reason I believe this is that in Olympic Recurve archery, the shoulders have to be rotated to be roughly 10–12 degrees closed. Rotation one’s feet in the open direction opposes the needed shoulder rotation and so cannot help accomplish that. So why did McKinney and Pace do it? My understanding is that they were both very flexible and could get their draw/string elbows considerably past being in line with their arrows. This is a source of variability that is not desired. The open stances restricted their ability to get past good alignment and helped them to become more consistent thereby. So, what help is this for people struggling to get to “good line?” None whatsoever. This is why I so often close up my student’s stances until they can establish good line and then, from there, go on to experiment with other stances.

So, when you read things and want to try things, I recommend you follow Coach Trajan’s advice and consider whether “you have the physical attributes to do them.” If you do not, either you have to commit to creating those attributes or (more often) consider other options. It is probably inimical to good form and execution to assume that just because Coach XYZ recommends this or that, that doing it would be good for you. Everything has to be explored and adopted based upon whether it fits your body and your mind and your goals before such a commitment can be made. A great help in that determination is a good coach. This is one of the main reasons I am working hard to become a good coach.