Video of the 2017 Shoot Up Finals for the Barebow division at the Lancaster Archery Classic in Lancaster, PA has been posted on YouTube (https://www.youtube.com/watch?v=39ppQpTQcz4). Recurve Barebow is more popular around the world than it has been in the U.S. (driven, I suspect, by the popularity of compound archery in the U.S.) but Barebow is on a rebound now and more and more people are attracted to it. Featured in these final matches are: Dewayne Martin, Scott Bills, Bobby Worthington, and John Demmer III.

Interestingly, DeWayne Martin shoots with a dead release, something very few recurve archers can pull off. (More and more I am coming to the conclusion that there are no absolutes in archery (e.g. You must use a “live” release in Recurve.), just some things make shooting “more or less difficult.” 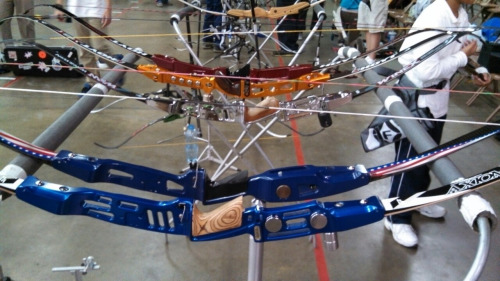 View the video! Flinches! Creeping! Tape on the nose! Tournament nerves! Stringwalking! (Although the announcers were somewhat clueless about the advantages of a crawl.) At 29:18 a close-up of John Demmer III’s quiver (current WA world field champion) shows arrows with two different fletching patterns. This would not be allowed in a WA shoot. The Lancaster Archery Classic uses a mixture of NFAA rules and their own. (It is a private shoot, they can do as they wish. If they apply for a sanction from one of the governing bodies they would have to conform to that association’s rules. Note Many people do not know that the Vegas Shoot, while owned by the NFAA, is a private shoot with its own rules.)

John Demmer III, the eventual winner, and an elite Barebow archer, shoots with a tilted head. You don’t have to do it right, you just have to do it over.