Marketing on a Myth

I was reading a website’s marketing piece for yet another mechanical broadhead design. The line that caught my eye was “… allows the <brand name of broadhead> to maintain a minimal amount of blade exposure reducing the wind planning (sic) effect insuring better accuracy at a distance and (than?) a comparable field point shot.” 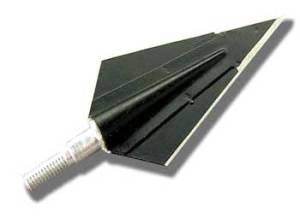 This is very bad science. An airplane wing allows a plane to fly because a number of factors:
1. Its shape causes air to move farther around one side than the other causing the pressure there (above the wing) to be lower than on the other side (below the wing) resulting in the air pushing harder from below than above creating aerodynamic lift.
2. The wing is angled to the line of flight, more so at slower speeds than to create more lift but also more drag. When the plane gets going, the higher the speed, the lower the “angle of attack” to reduce the drag and the lift (you only need enough lift at that point to keep the plane level, not climbing even more).

So, to get this “force” attributed to broadheads, the blades (aka “wings”) would have to be curved and at an angle to the air sliding by them. In fact they are flat, that is “not curved,” and in line with the shaft of the arrow creating no lift whatsoever. Not only that but there are two or three of these wings spaced equally around the point either cancelling each other out or accentuating one another. If there were actual lift created (there is not) it would be at a right angle to blade and hence a right angle to the shaft and since it would be off axis, the effect would be to spin the arrow shaft around the shaft (faster or slower depending on whether they are working with or against the arrow’s fletching), which is considered to be a good thing. 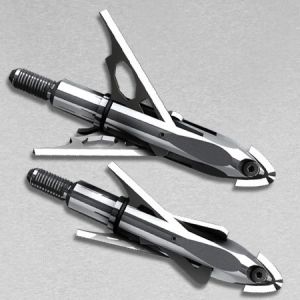 A mechanical broadhead cocked (below) and deployed (above)

So, where did the idea of the “wind planing effect” come from?

I have found references to this effect that go back to the early 1970s and I suspect they go back even farther. But I suspect it came about when people had the opportunity to compare the same arrows with different points, so possibly when screw-in points were invented. Arrows with a screwed in target or field points would impact in different places than a screwed in broadhead of the same weight. People immediately wondered “why?” and the wind planing effect story was invented to explain the problem.

So what was the real reason the two arrows hit in different places?

My guess is that a number of things could be the cause. First, broadheads are quite longer than target or field points. If they were not perfectly straight, when screwed on a shaft you would have the equivalent of a bent arrow and so it would not hit in the same place. Second, those considerable longer broadheads create a longer arrow with a different weight distribution (a different “front-of-center” or FOC balance point). That would cause the arrows to fly differently, too.

Of course, there are dozens and dozens (and dozens) of mechanical broadheads being sold in today’s market. All of the marketing for which is, well, bogus. So bowhunters are buying into more complicated and more expensive broadheads (in which more things can go wrong, such as the cutting blades not deploying or parts falling off before use making them unusable) for no good reason.

Can you see now why I ask all of my coach-trainees and all of my archers to think through everything and ask a lot of questions?